The Capital’s Most Beautiful Street

Krakowskie Przedmieście  is part of the so-called “Royal Route” running from the Royal Palace to the residence in Wilanow. The street connects the present with the past in an almost mystical way. Enjoy a magical and touching journey where images of Canaletto’s view of the capital overlap with chapters from the war and contemporary charm.

For several centuries, the Krakow suburb has been one of the most prestigious streets in Warsaw. It was here that the now non-existent Krakow Gate began the road leading to the ancient capital – hence the name of the Krakow suburb. This is the path that was followed in various royal processions including trimphal entries after military victories. There are a number of former aristocratic residences and churches along the street.

During the tour we will see all the most beautiful and interesting sites of the Krakow suburb. This includes two unique churches – the Church of the Holy Cross and the Church of St. Anne, which has a complicated and painful past that reflects the history of both our city and country. We will also follow the footsteps of accomplished names like Marie Curie and Frederic Chopin. A meeting with Prince Jozef Poniatowski awaits us by the Presidential Palace. Join us for all this and more!

●Walk lasts about one and a half hours

Starting point is the Church of the Holy Cross 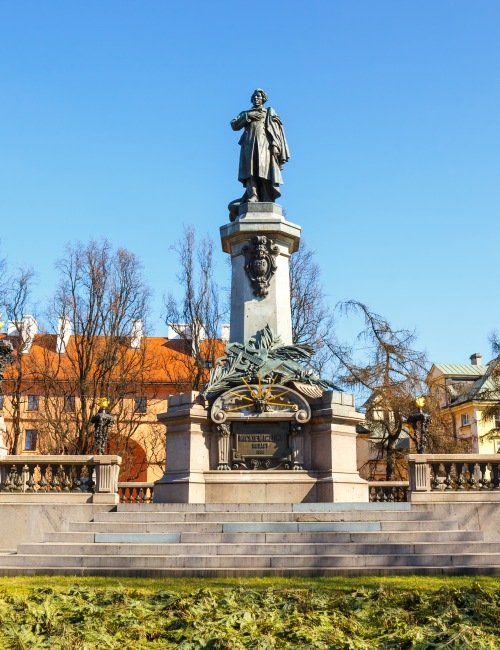 Krakowskie Przedmieście - Details of stops on the tour 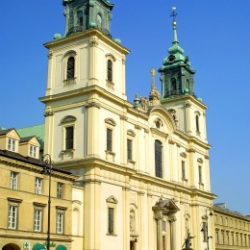 Church of the Holy Cross

This is one of the most important churches in Warsaw, along with the Cathedral. It was established in the middle of the 17th century on the site of a newly formed parish run by missionary priests. This beautiful church is seen today in the form it was given during  renovations that took place after the war. The original project was designed by the royal architect, Joseph Belotti, the towers designed by Joseph Fontana and the facade by his son Jacob (all decorated with statues by eminent sculptor John George Plersch). Elsewhere in the church, we will find urns containing the hearts of Frederic Chopin and other important figures of Polish history and culture. You will also hear a remarkable story about the history of the statue of Christ standing in front of the church. 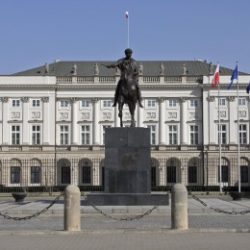 The next stop on our tour is the most impressive and important palace in Warsaw. This Wladyslaw Reymontamazing residence, rebuilt several times, was originally constructed for the Koniecpolski family but ownership passed to other aristocratic dynasties like the Lubomirski and Radziwill families. The walls of this building have witnessed many notable events related to the political and social life of the country. Among other statesmen, Napoleon and Alexander I stayed here. There were balls, theater and opera performances and the first concert played an 8-year-old Frederic Chopin. In 1818 ownership of the mansion was acquired by the authorities of the Polish Kingdom and the seat of the Government, hence the alternate name for the building, the Governor’s Palace. 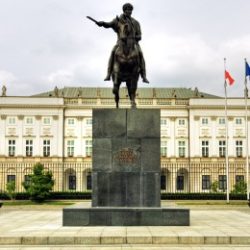 Prince Jozef Poniatowski is a figure of legend in Polish history – a supporter and defender of the Constitution of May 3, the Minister of War and the Commander of the Duchy of Warsaw, Marshal of France and a national hero. The memory of his achievements was extremely heavily cultivated throughout the period when Poland was partitioned. Shortly after his death, the idea of a monument in his honor in front of the Palace of the Governor was advanced. The task of completing the sculpture was entrusted to the famous Danish sculptor Thorvaldsen Bertelowi. Today we can see the second casting, a gift of the Kingdom of Denmark made according to a plaster model stored in a Copenhagen museum. What happened to the first monument? Join us and find out! 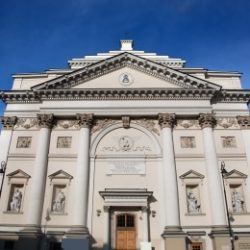 The origins of the this Bernardine church go back to the 15th century. Fires have shaped much of its transformation over the years. It was destroyed at the end of 17th century after the Swedish invasions and rebuilt according to a design by Giovanni Gisleni. The facade was rebuilt by Piotr Aigner during the time of Stanislaw August but another catastrophe awaited the church – World War II. It was burned by the Germans in 1944. Today we see the building in the form it was given during the post-war reconstruction. No matter its physical form, the Church of St. Anne has a had a significant meaning for the people of Warsaw for centuries and has been the scene of many historic events. In the days of the occupation and the Polish People’s Republic, it was the site of patriotic manifestations in the form of decorating famous graves, symbolizing waiting for the resurrection of the nation. It has also been a church university since the 1920’s.

Old Warsaw Through the Eyes of Canaletto

After the recent renovation of the Krakowskie Przedmieście, its original splendor was restored. Now, on the sidewalks, there are 4 angled glass cubes with reproductions of paintings by Canaletto depicting Warsaw in the second half of the 18th century (Castle Square, the Church of Holy Cross, St. Anne’s Church and the Visitationist Church). Born in Italy, Canaletto (Bernardo Bellotto was his real name, the nickname comes from the name of his uncle) worked in many European cities, primarily painting cityscapes, architecture and recreating daily life with meticulous detail. In time, he settled in the court of Stanislaw August Poniatowski. Modern Warsaw owes much to this painter, who eventually made his home here. His paintings were frequently found to be helpful in the reconstruction of the capital after the war.

In the days when Marie Curie lived in Warsaw, the current building of the Central Agricultural Library was the Museum of Industry and Agriculture. It made space available to the needs of the so-called “Flying University”, a secret school for women. Its lecturers were eminent scientists and it produced a great number of accomplished graduates. In the basement of the museum, a young Marie Curie, then known as Maria Sklodowska, prepared for her exams at the Sorbonne in Paris. The path to her two Nobel prizes began here in Warsaw.

Warsaw played a special role in the life of this great composer. In 2010, designated as The Year of Chopin, the city authorities decided to celebrate in a rather unusual way. Fifteen multimedia benches were placed along the Krakow suburb, each with a description explaining its relationship with the composer and a map of other benches. Thanks to the benches, the timeless melodies of Chopin add to the elegant atmosphere and we will have the chance to see and hear several of the benches during our walk.