Home Route of the Warsaw Uprising

For 63 days (from August 1 to October 3, 1944), Warsaw fought alone against the German occupiers. Soldiers, scouts and civilians, doing what they could in a heroic effort to fight for freedom and surival, suffered huge casualties and made the ultimate sacrifice. Crushing the uprising meant the destruction of the city. Join us on a moving journey on the trail of the Warsaw Uprising.

The Polish Army Command wanted to liberate the capital to prevent Soviet domination. Operation “Storm”, which was one of the key steps in the outbreak of the uprising, failed. The Red Army idly watched the brutal destruction of Warsaw from the east bank of the river and help from the West was simply insufficient to be able to tip the balance of victory to the insurgents. Within three months of the uprising, 16,000 Polish soldiers died, almost as many were taken captive and approximately 20,000 were wounded. The number of civilian casualties reached 200,000. The world just watched the utter devastation of a huge city in the heart of Europe. Participants in the uprising displayed heroic valor, fighting to the end for every house and alley. Meanwhile, the German occupiers treated both the participants  and the civilian population of the city with absolute cruelty.

During our visit we will tell you about the most dramatic moments of the uprising. Among other places, we will visit St. John’s Cathedral, which couldn’t be saved from the destruction. We will also see Podwale, near the Raczynski Palace, to hear the story about the explosion of a German armored vehicle, which killed more than 300 people. We will visit the palace itself, where the Germans massacred patients in the insurgent hospital, and Wola, where thousands of civilians were killed. Other interesting points on the tour include the monument to the Little Insurgent, Warsaw Uprising Monument and Krasinski Square, where there is also a sewer manhole that allowed thousands of insurgents to be evacuated from the Old Town.

You can also visit the Warsaw Uprising Museum with a guide 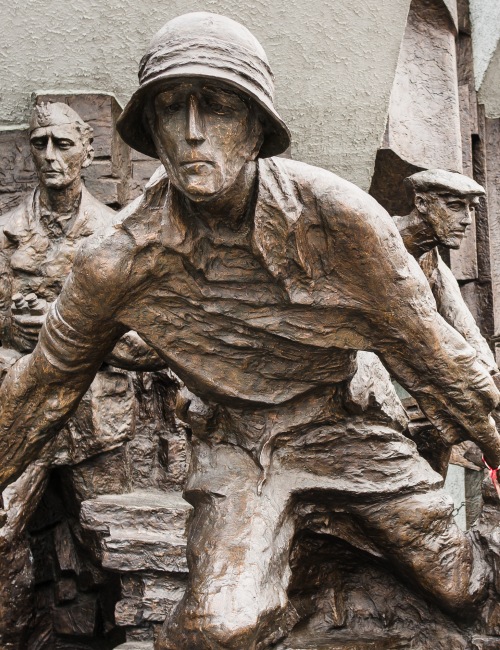 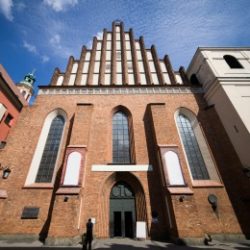 The most important church in Warsaw, it is full of great works of art and has a special religious significance as a symbol for the people of the capital. It was fiercely defended by the insurgents but unfortunately could not be saved from total destruction in the war after surviving the bombing at its beginning in September 1939. We will learn about the destruction of the church, its reconstruction and what little could be saved within its walls. You will also learn about one of the most beautiful stories associated with the military history of the city, that of the statue of Christ with a Gothic crucifix which has for centuries been surrounded by a special cult in Warsaw. 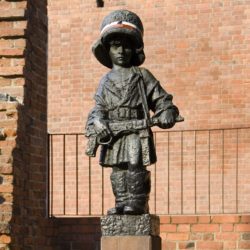 Monument to the Little Insurgent

In 1981, on the initiative of scouting organizations, a memorial was built on the remains of one of the towers of Old Town to commemorate the youngest soldiers of the uprising. It was created by an artist who was influenced by his work just after the war, when he helped to remove rubble from the Old Town. Many children took part in the uprising, acting as messengers and guides in the sewer system. They also participated in fighting, throwing bottles of petrol on the German tanks. Many of them received military decorations for bravery on the battlefield. After the uprising, they formed the youngest group of prisoners in the history of World War II.

Podwale (site of the explosion of the tank traps)

Podwale is the site of one of the greatest tragedies during the uprising. During the battle for the Old Town, insurgents took possession of a heavy cargo transporter while storming a barricade. The soldiers had not previously encountered this type of vehicle and were not aware of its function, nor the fact that the front armor contained hidden explosives. During a triumphal tour of the Old Town, surrounded by crowds of civilians who wanted to see the captured vehicle, it exploded, causing a bloodbath. The tragedy killed around 300 people and parts of human bodies were scattered over a vast area. Today, the anniversary of these events is marked on the Day of Remembrance of the Old Town.

This was the largest hospital in the city and also sometimes served as the headquarters of the army. After the conquest of the Old Town by the Germans,  the seriously injured remained in the hospital and they were brutally murdered by the invading German and Ukrainian troops. The death toll was at least 200 people. Our guide will share more about these tragic events.

Krasinski Square played a very important role from the beginning of the Warsaw Uprising. Almost immediately taken over by insurgents, it became a crucial conduit for moving assistance provided during the uprising by air. Our guide will show you the sewer manhole through which over five thousand insurgents escaped after the Germans captured the Old Town. The square is the site of a monument commemorating the heroes of the Warsaw Uprising and is one of the most important places that pays tribute to their memory. 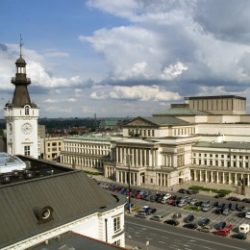 Theatre Square (site of the death of Baczynski)

Krzysztof Baczyński died in the first days of the uprising. He was among the most famous of the generation of artists and writers that came of age in Poland in the interwar period. The poet found himself in a unit that was assaulting a position at the Blank Palac next to Theatre Square. He was shot and killed by a German sniper hidden in the building of the Grand Theatre. At a memorial plaque placed at the site of his death, you will learn about the poet’s short but remarkable life.

In the early days of the uprising in Warsaw’s Wola district, the Germans carried out the largest single mass murder of Polish civilians. While following Hitler’s order to completely annihilate Warsaw and its inhabitants in retaliation for the uprising, the SS and German police massacred up to 65,000 residents of the district. Mass executions were held with unprecedented cruelty in homes, backyards of houses, squares and major industrial plants. Among many others, 360 patients and employees at the Wolski hospital were murdered. The greatest concentration of these brutal actions took place between August 5th (so-called “Black Saturday”) to August 7th. Visiting Wola and listening to the harrowing stories about these events, we begin to realize the terrifying scale of the horror that victims suffered during the Warsaw Uprising.