Take some time out to enjoy one of the most beautiful palatial grounds in Europe. Over 70 hectares of greenery and magnificent eighteenth-century palaces and pavilions create a magical place with a unique charm. The park has hosted many famous historical figures and has been the scene of both major events and breathtaking court games and performances. Join us for a unique royal walk!

The area of today’s park was used centuries ago during the reign of the dukes of Mazovia of the Piast dynasty for recreational activities. The prince’s menagerie was kept here and a castle was situated nearby. The first bathhouse, after which the park is named, was constructed in the 17th century. Thanks to the patronage of king Stanislaw August Poniatowski, the court architect, Domenico Merlini, designed other structures that helped to create the charm that made this a favorite place of relaxation for the monarch, his court and guests.

During our tour we will visit all the most beautiful buildings in the park, starting with the Palace on the Island, the Old Orangery and the eighteenth-century court theater (one of the few of its kind in Europe). Slow down, take in the sights and enjoy a truly unique experience in this enchanting park in the center of Warsaw.

Tour lasts about an hour and a half, plus another hour to see the interior of the Palace on the Island

Starting point – Palace on the Island 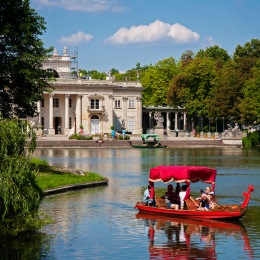 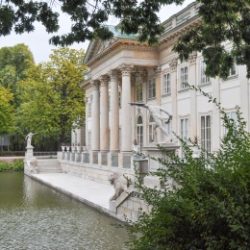 Palace on the Island

Our tour begins with the most famous buildings in the park and the inspiration for its name, the Baths. The Baroque-style baths were built in   The designer of the original building was the famous architect Tilman van Gameren. In the second half of the 18th century, the new owner, King Stanislaw August Poniatowski, decided to rebuild the baths in the classical style. He also wanted a palace in the style of Italian villas. An enthusiastic patrons of Italian arts, the King established the palace museum, where today you can visit the wonderful collection of paintings (two valuable works by Rembrandt were transferred to the Royal Castle). Beautiful architecture, a charming landscape and an amazing art collection – what more could you want?

Otherwise known as the Great Annexe . There was already a small building with a kitchen here in the time of Lubomirski but Stanislaw August ordered him to expand it to meet the needs of the royal court. The work was taken by Domenico Merlini, who also worked on the reconstruction of the Palace on the Island. There were apartments for the courtiers, pages and guests as well as kitchens, pantries and a cellar where royal reserves of wine were stored. A special wooden tunnel once connected the Annexe  with the Palace on the Island. take advantage of this unique opportunity to look closely at how a royal court really functioned. 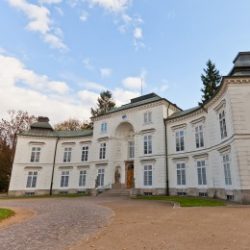 The name comes a village that was once located here. The story of the building is intertwined with the biography of one of the most remarkable figures in our history – the nephew of Stanislaw August Poniatowski, Prince Joseph. The king was originally supposed to live in the palace, but instead chose to live in the Palace on the Island. The Myślewicki Palace was donated to the royal nephew, who went on to the post of Minister of War of the Duchy of Warsaw, and later died fighting alongside Napoleon. In more recent history, the palace was the site of US-Chinese talks at various times during the Cold War. The Royal Baths are full of surprises! 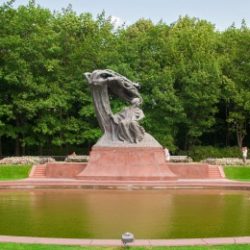 This work by Waclaw Szymanowski is undoubtedly one of the most beautiful of all Polish monuments. The original plan was to honor Chopin on the 100th anniversary of his birth in 1910 but the monument was not completed until the interwar period in the 1920’s. The genius of the piano is presented under a weeping willow, the most “Polish” of trees, with a serene expression on his face as he gazes into the pool beside him. This is the perfect place to learn all about the exceptionally strong relationship between the composer and this city, where he grew up and matured and where his heart still lies. It is also a great place for outdoor concerts, which are held during the summer months on Sundays. 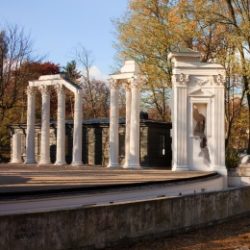 The 18th century brought a renewed interest in classical antiquity, partly because that was when the ruins of Pompeii and Herculaneum were discovered in the ashes of Mt. Vesuvius. Buildings in the style of those ancient ruins were an essential element of 18th century garden designs. An excellent example of this is the Laziekni Park Amphitheatre. Colorful performances were an important part of court life, so it’s no wonder that King Stanislaus wanted to have an amphitheater where he could impress his courtiers and guests with great spectacles theater under an open sky. During the opening of the theater, a production of the balet “Cleopatra” was staged and the nearby water made it possible to include a sea battle!

Charming paths in the park lead us to a pavilion called the White House. This lovely building in the style of a summer villa was built for King Stanislaw by Domenico Merlini. The monarch lived in the White House until the Palace on the Island was completed and then made it available to guests and family members. An exhibition at the White House shares a collection of royal artwork with beautiful engravings to Ovid’s Metamorphoses. During the French Revolution, French King Louis the 17th, brother of victim of the guillotine Louis the 16th, lived here in the White House. 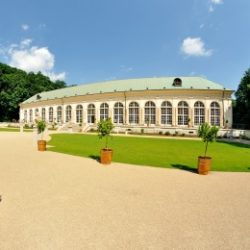